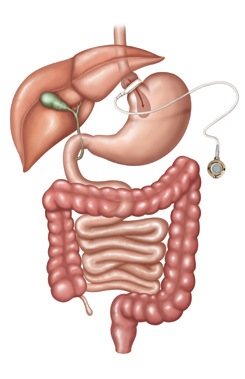 Laparoscopic adjustable gastric banding, commonly referred to as lapbanding, is a minimally invasive weight-loss operation that has been performed in Australia for over 30 years. It essentially involves placing a silicone band around the upper part of the stomach. The LAGB is made of soft silicone and is equipped with a firmly attached inflatable balloon component. This balloon component is connected to an access port via a tube.

The band is positioned around the upper part of the stomach via keyhole (laparoscopic) surgery, so as to create a small pouch. This has a capacity of approximately 15-20ml. The band helps individuals lose weight via two mechanisms:

Satiety= describes your experience after a meal, in particular how long before you start to feel hungry again
Satiation= Occurs during a meal, and is the point at which you feel you’ve had enough to eat and don’t don’t want any more food

The above-mentioned access port is situated under the skin, usually in the upper abdomen area and is easily accessible by the treating doctor via a special needle. By adding/ removing normal saline (sterile water) to the port, it adjusts the volume of fluid in the balloon component of the band, and hence the size of the gastric pouch outlet.

As with any other treatment modality, the lapband is a tool which is part of an overall healthy lifestyle process. The weight loss and health improvements often take approximately 18-24 months to achieve. The science but also clinical experience, tells us that those patients with a LAGB who attend regular follow-up at Clinic experience better health outcomes than those that don’t.

The “gastric band zones” act as a guidance, especially for patients with a LAGB. However, it is up to the treating doctor to determine if adjusting your band is clinically needed or not. It must be noted that if a LAGB is over-tightened, it makes it difficult for an individual to consume healthy nutritious solid food, however slider foods and liquid calories still go down very easily which are not a healthy choices, hence defeating the purpose. This is known as maladaptive eating.

The LAGB may be considered in patients:

LAGB Contraindications include, but are not limited to:

The LAGB is not permitted in patients who have:

A history of auto-immune diseases such as scleroderma or SLE

Chronic pancreatitis (inflammation of the pancreas)